Winger Tom Briscoe has agreed a new two-year contract with Betfred Super League Champions Leeds Rhinos that will keep the record breaking winger at Emerald Headingley until at least the end of the 2020 season.
Briscoe joined the Rhinos in 2014 from Hull FC and won the Lance Todd Trophy the following year with an incredible five tries in the Ladbrokes Challenge Cup Final win over Hull KR at Wembley. He followed that up last season by scoring twice at Old Trafford to help secure the title against Castleford Tigers in the Grand Final.
The 28-year-old has scored 55 tries in 113 appearances for the Rhinos and was due to be out of contract at the end of this season. He commented, “I am delighted to have my future sorted early in the season and I am looking forward to the next two years. On and off the field it is an exciting time at the Rhinos. The stadium is looking great and on the field we are in a period of transition and I want to be part of the team going forward to win more silverware. The young lads have been coming in and doing a great job and I am looking forward to working with them over the next two years.
“I am 28 now and coming into the middle part of my career and hopefully my best years are still ahead of me. I wanted to make sure that was here at Leeds,” added Briscoe. 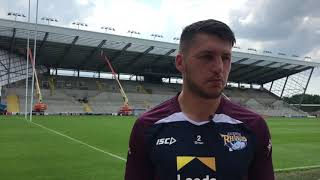 More Challenge Cup action for fans to enjoy this week

Hetherington says we must stick together to come back stronger

Check out our all new Women in Sport podcast