Betfred Super League Champions Leeds Rhinos have been given a huge boost ahead of tonight’s crucial clash with Huddersfield Giants at Emerald Headingley with the news that forward Adam Cuthbertson has agreed a new two year contract with the club.
Cuthbertson, who has scored 28 tries in 106 appearances for the club, arrived at the Rhinos in 2015 from Newcastle Knights and finished that first season as runner up for the Man of Steel award. He has won two Grand Finals, a League Leaders Shield and the Challenge Cup in his three years and half years at the club so far. The 33-year-old was due to be out of contract at the end of the current season but will now remain at Emerald Headingley until at least the end of the 2020 Super League season.
Commenting on his new deal, Cuthbertson says, “I am very happy to have it all sorted. I have been contracted for the last four years at the club, so it will be good to make this my final home going forward. Hopefully we can have even more success in the years ahead.
“You have to think about a lot of things when it comes to signing a new contract but in terms of where I was going to sign, it was a very easy decision. I love this club and I couldn’t think about being anywhere else.  Over the next couple of years there will be a transition in the squad. Some of the older players have dropped off in recent years since I have been here and I suppose I will fulfil that role moving forward. The young guys will keep me on my toes and it is a great role that I have working with them. I am looking forward to being a vital part of this team and for them in their career development.
“I have never tried to put too much planning into my career. Throughout my career I have had a few different clubs, but it is nice to have settled at a club where I have had success. I have been able to ingrain myself within the culture of the club and make this a long-term commitment between both parties. I feel part of the club, not just as a player, but part of the fabric of the place.”
Cuthbertson combines playing with coaching the Rhinos new Womens team and he admits challenges on and off the pitch have freshened his rugby up and given him a new insight into the game. He adds he is also enjoying working with a new set of youngsters in the Rhinos first team squad. He added, “Every year we have won something it has been with a different group of players and with a different dynamic. Our aim is to keep that successful run going with the younger generation. People ask if our motivation to win goes down because of the success we have had but we are inspired to win more and that is driven through our younger players when they are watching the first team and wanting to get into first grade. They want to continue that and make their own legacy.
“There is such a great culture at the club from the players right through to the coaching staff and all the backroom team at Emerald Headingley, we all get along together. When you have a culture like that at a club it makes life so much easier and more enjoyable. We have got a bunch of weirdos here in our squad and that makes every day really interesting. No two personalities are alike so it makes it fun every day when you come into training! I have played at clubs where the culture has not carried from on the field into the off the field operation and that is a big part of why there is so much success at the Rhinos and the club is able to retain so many players and produces so many good players from the Academy.”
The Rhinos face Huddersfield Giants tonight at the start of three crucial home games in 13 days as they look to get back to winning ways in the league having booked their Ladbrokes Challenge Cup semi final spot. Tonight’s game will see an extra 1,000 fans back in the iconic new South Stand and Cuthbertson’s says their home is beginning to get back some of its awe-inspiring inspiration for the Rhinos players. He added, “For the first time, prior to Friday’s game, I had a moment when the new stand took my breath away. When you look at the new South Stand, it is so huge and imposing. It was always intimidating for opposition players when it was packed with fans but even when it is empty the day before a game, it so much bigger and daunting. It is going to help to make our home a fortress and something I am excited about playing in front of in the years ahead.” 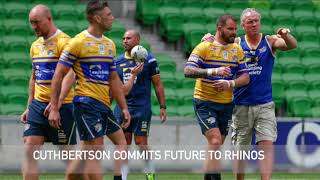